The Board of Directors (the “Board” or “Directors”) of Parkway Utility District (the “District” or “Parkway”) met in regular session, at 6:30 p.m., at 12843 Tidwell Road, Houston, Texas, on Tuesday, December 18, 2018, pursuant to notice of said meeting posted in accordance with Chapter 551 of the Texas Government Code; whereupon the roll was called of the members of the Board, to-wit:

All members of the Board were present. Also attending were: Diane Bailey of McLennan & Associates, L.P. (“Bookkeeper” or “McLennan11); Delia Yanez of Assessments of the Southwest (“Tax Assessor-Collector”); Bradley Jenkins, Kaci Schlachter and Bethany Miller of JoneslCarter (“Engineer” or “JoneslCarter”); Charlie Chapline and Rebecca Marcucci of Municipal District Services (“Operator” or “MDS”); Gary Syzek of Systems Project Management; Elliot M. Barner, attorney, and Diane F. Brewer, paralegal, of Radcliffe Bobbitt Adams Polley PLLC (“Attorney” or “RBAP”); and all persons on the attached attendance roster.
The President, after finding that the notice of the meeting was posted as required by law and determining that a quorum of the Board of Directors was present, called the meeting to order and declared it open for such business as may come before it.

The President first opened the meeting to public comment.

Mr. Chapline suggested that the Board could make a determination that Forest Park’s available units were less than the total amount of units actually within Forest Park until such time Concerning the Lift Station No. 4 Emergency Sanitary Sewer Manhole Replacement Project, Mr. Jenkins presented Pay Estimate No. 2 and Final with the completed Affidavit of Bills Paid and Affidavit of Guarantee in the amount of $9,999.25 and recommended payment of same.

Next, Mr. Jenkins reported that the inspection of Lift Station Nos. 1, 2, 4 and 5 is scheduled for December 19, 2018, and he anticipates completing the inspection report in February 2019.

Mr. Jenkins next reported that JoneslCarter has completed the draft Flushing Plan for the flushing of the District’s water distribution system and MDS is reviewing such draft.

Mr. Jenkins then reported that a letter was sent on behalf of the District to Sunrise Plastic’s Enterprise, a copy of which is attached to his report, approving the sanitary tie-in to the District’s manhole on Dennis Way. Mr. Jenkins added that the letter requires the developer to submit construction plans for District review prior to final approval.

Mr. Jenkins then reported that JoneslCarter is working on the water distribution model and will perform field testing for the Elevated Storage Tank Variance Alternate Capacity Request once the new booster pumps are operational.

Mr. Jenkins reported that JoneslCarter has completed preparation of Bond Application Report No. 16 (the “BAR”) and has provided same to Mr. Barner. Mr. Barner explained that he has reviewed the BAR and that there are some other items to be discussed before the BAR can be completed.

Mr. Jenkins reported that the Texas Commission on Environmental Quality approved the District’s Application for Approval of a Change in Project Scope and Approval to Release $1,469,704 from Escrow, a copy of which is attached hereto.

The Bookkeeper’s Report and Investment Report were presented to and reviewed with the Board by Mrs. Bailey, copies of which are attached hereto. Mrs. Bailey reported that the District has approximately 6.79 months’ operating reserve.

Ms. Bailey next informed the Board that Mr. Barner had sent her a copy of the TCEQ’s letter approving the District’s most recent application for Change in Project Scope and Request for Release of $1,469,704 from Escrow. Ms. Bailey informed the Board that such funds, once release from escrow, could be deposited into the District’s general operating fund.

Ms. Bailey then presented the general operating fund budget and the Order Adopting Budget for Fiscal Year Ending (“FYE”) December 31, 2019, a copy of which is attached hereto.

Upon a motion by Director Balderas, seconded by Director Rettig, after full discussion and with all Directors present voting aye, the Board approved the Bookkeeper’s Report, as presented, and acted on the following:

The Operator’s Report was presented by Mr. Chapline, a copy of which is attached hereto.

Ms. Yanez exited the meeting at this time.

Mr. Chapline next presented the Delinquent Letter Accounts Listing Due December 18, 2018, a copy of which is attached to the Operator’s Report. A discussion then ensued regarding postponement of terminations during the Holiday. It was the consensus of the Board to defer terminations until January 8, 2019.

Upon a motion by Director Rettig, seconded by Director Balderas, after full discussion and with all Directors present voting aye, the Board approved the Operator’s Report, as presented, and authorized write-offs and terminations effective for January 8, 2019.

Mr. Jenkins then presented the Joint Facilities Report, a copy of which is attached hereto. Mr. Jenkins reported that he met with A&S Engineers, Inc. (“A&S”) last week.

Mr. Jenkins reported that further modifications to the RWWTP’s fine screen (the “Screen”) have been made in the hopes of improving the Screen’s operation, which is frequently disrupted by large debris collected from both the District and Greenwood’s collection systems.

Next, Mr. Jenkins introduced Bethany Miller to explain certain elements of the A&S’ Preliminary Engineering Report (the “PER”) for the RWWTP Expansion Project. Ms. Miller reported that the PER has been completed and has been under review by JoneslCarter. Ms. Miller noted that A&S and JoneslCarter have identified three (3) items that need further discussion and comment from the Boards: 1) screening; 2) de-watering; and 3) disinfection.

Ms. Miller first explained various mechanical fine screen technologies that could be utilized at the RWWTP. Ms. Miller then advised the Board that JoneslCarter recommended the externally fed drum screen technology. An extensive discussion ensued regarding the effectiveness of such technology and the operations and maintenance costs for each technology discussed.

Ms. Miller next discussed current sludge-hauling methods and alternatives for de-watering sludge at the RWWTP. Ms. Miller advised the Board that JoneslCarter recommended continuing to use the mobile de-watering method. An extensive discussion ensued regarding such methods and the capital costs and operation and maintenance costs for each method discussed.

Ms. Miller then discussed current the disinfection chemical process and alternatives for the R WWTP. Ms. Miller explained that both gaseous and liquid chlorine disinfection systems are commonly used and that there are benefits to both processes. An extensive discussion ensued regarding both gaseous and liquid disinfection systems and the costs and regulatory requirements for such systems.
Upon a motion by Director Balderas, seconded by Director Woods, after full discussion and with all Directors present voting aye, the Board approved use of: 1) externally fed drum screen technology; 2) the mobile de-watering method; and 3) the gaseous chlorine disinfection system.

Mr. Jenkins reminded the Board the final report on the management of identified poorly draining areas near the R WWTP has been completed and that a summary of such report has been provided to the Board. Messrs. Jenkins and Mr. Barner added that the entire 200-page report is available for anyone that requests a copy.

Mr. Jenkins then presented A&S’s proposal for design of a 16″ surface water line along Tidwell Road. Messrs. Jenkins and Barner reminded the Board such line was required in order to receive the additional surface water from the City of Houston (the “City”), which is needed by Parkway and Greenwood. An extensive discussion ensued regarding the need for such line and the timing of such line’s design and construction, as well the effect of a delay in completion of such line on the District’s ability to receive additional surface water from the City. Upon a motion by Director Everhart, seconded by Director Balderas, after full discussion and with four (4) Directors present voting aye, and Director Rettig abstaining, the Board approved the A&S’ proposal for Professional Engineering Services of the Waterline Upgrade Along Tidwell Road, a copy of which is attached hereto.

Mr. Jenkins updated the Board regarding the Tidwell Road Improvement Project and discussed the summary of funding for different portions of the project. Mr. Barner reported that Harris County (the “County”) rejected the District’s and Greenwood’s counter-offer for the County’s purchase of an easement for the RWWTP site for the road widening project. Mr. Barner explained the final offer on the easement of $1.25.

Mr. Jenkins then requested that the Board schedule a special meeting to discuss the Global New Millennium Feasibility Study and the Capital Improvement Plan.

Mr. Barner discussed Senate Bill 1812, which requires the District to file an annual eminent domain report with the State Comptroller.

Mr. Barner presented the Amended District Information Form (“ADIF”), a copy of which is attached hereto, and explained that the ADIF was revised to include park bond authority.

Mr. Barner then presented the 2019 Annual Agenda, a copy of which is attached hereto.

Upon a motion by Director Rettig, seconded by Director Balderas, after full discussion and with all Directors present voting aye, the Board: 1) authorized Mr. Barner to file the annual eminent domain report on behalf of the District; 2) approved the ADIF and authorized filing same in the Real Property Records of Harris County, Texas; and 3) acknowledged receipt of the 2019 Annual Agenda.

THERE BEING NO FURTHER BUSINESS BEFORE THE BOARD, the meeting was adjourned. 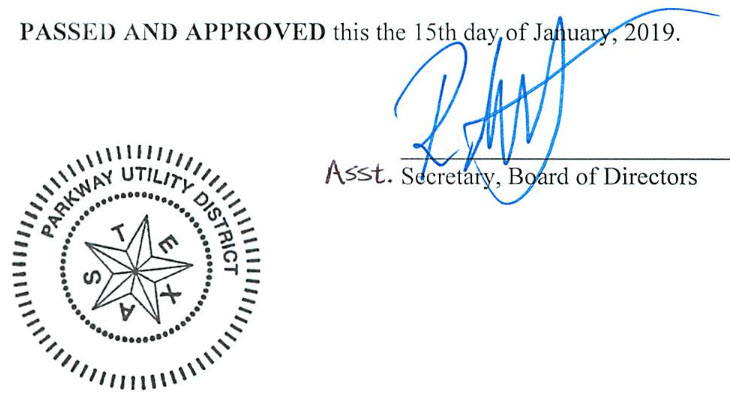