The Board of Directors (the “Board”) of Parkway Utility District (the “District”) met in a special session, open to the public, at 12843 Tidwell Road, Houston, Texas, at 6:30 p.m. on February 19, 2019, whereupon the roll was called of the Directors, to wit:

The meeting was called to order, and in accordance with notice posted pursuant to law, copies of certificates of posting of which are attached hereto as Exhibit A, the following business was transacted:

1. Public Comments. There were no public comments.

2. Minutes of previous meetings. Minutes of the meetings of January 9, 2019, January 10, 2019, January 15, 2019, and January 21, 2019, previously distributed to the Board, were presented for consideration and approval. President McNeil noted that instructions to the attorney were omitted from the minutes of January 21, 2019, and the Board requested the minutes be amended to reflect that the Board advised the District’s previous attorney, Mr. Elliot M. Barner of Radcliffe Bobbitt Adams Polley PLLC, to stop all construction, activity and capacity commitments with Greenwood Utility District (“GUD”) pending confirmation of actual capacity for the District and GUD because current capacity exceeds the permit.

3. Tax Assessor and Collector’s Report, status of delinquent tax accounts, and payment of bills. Ms. Yanez presented to and reviewed with the Board the Tax Assessor-Collector’s Report for January, a copy of which is attached hereto as Exhibit B. Ms. Yanez reported that 85.12% of the District’s 2018 taxes have been collected as of January 31, 2019.

Ms. Yanez presented a request for waiver of penalty for payment of late taxes and confirmed the bill was mailed to the correct address.
Upon motion by Director Balderas seconded by Director Rettig, after full discussion and the question being put to the Board, the Board voted unanimously to approve the Tax Assessor-Collector’s Report, authorize the expenditures listed therein and to decline the request for waiver of late fees for payment of delinquent taxes.

5. Operator’s Report and hearing on delinquent accounts. Ms. Marcucci introduced Mr. David Neil with Neil Technical Services, a vendor of the District. Mr. Neil reported that his company has been providing services to the District over 20 years and that he is a licensed master electrician. He discussed his expertise and the types of entities in his client base.

Ms. Marcucci then presented to and reviewed with the Board the Operations Report, a copy of which is attached hereto as Exhibit D. She reported on a review of the Surface Water Transmission Facility in preparation of summer peak and noted that the District is receiving surface water through GUD to be re-treated due to the varying chlorine levels in the surface water received from the City of Houston.

Ms. Marcucci reviewed photographs of a sinkhole at the regional Wastewater Treatment Plant and reported that MDS notified GUD’s engineer. She stated that GUD’s engineer and the original contractor inspected the area and the District is waiting to see if the work performed is still under warranty.

Ms. Marcucci reported that the Generator has been delivered and not installed at Lift Station No. 6 and was paid with FEMA funds.

Ms. Marcucci reviewed the delinquent list and noted that Sheldon ISD is on the list and MDS will give them a courtesy call in the event of an accounting error.

Mr. Browne distributed a key contact list to each of the Board members to use for emergency services.

Ms. Marcucci requested that the Board authorize termination of delinquent accounts in accordance with the District’s Rate Order and authorize sending two accounts to collections.

Upon motion by Director Rettig, seconded by Director Balderas, after full discussion and the question being put to the Board, the Board voted unanimously to approve the Operator’s Report; to terminate the delinquent accounts in accordance with the District’s Rate Order, and to authorize sending two accounts to the uncollectible roll.

6. Receive and approve report on PUD/GUD Joint Facilities, and take any necessary action. Mr. Jenkins reported no additional updates from Joint Facilities activities outside of what was presented and discussed at the last meeting.

7. Review Amended and Restated Wastewater Treatment Plant Agreement with Greenwood Utility District. It was the consensus of the Board to defer this items pending attorney’s complete review.

Mr. Jenkins requested that the Board approve and authorize execution for President McNeil to sign a letter to the TCEQ requesting emergency approval to waive competitive bidding and approve a change order to complete the Water Plant Improvements that include raising elevations and modify the structural foundations of the control building, chemical building, booster pump slab and generator slab.

A copy of the letter is attached to the Engineer’s Report. Upon motion by Director Balderas, seconded by Director Woods, after full discussion and the question being put to the Board, the Board voted unanimously to approve the letter to the TCEQ requesting a waiver of competitive bidding and approval of a Change Order and authorize President McNeil to sign the letter.

Mr. Jenkins reported that six bids were received for the 2019 Sanitary Sewer Cleaning and Televising and J|C recommends awarding the contract to CSI Consolidated LLC, who presented the lowest qualified bid for $145,656.50. Upon motion by Director Rettig, seconded by Director Woods, after full discussion and the question being put to the Board, the Board voted unanimously to approve awarding the contract for 2019 Sanitary Sewer Cleaning and Televising to CSI Consolidated LLC for $145,656.50.

Mr. Jenkins reported on the inspection of Lift Station Nos. 1, 2, 4, and 5 and noted that during the inspection there was some indications that the pumping capacity for Lift Station No. 2 may be undersigned. He stated that MDS pulled the pumps and J|C received the data today and is evaluating capacity to determine if capacity needs to be updated. He said that a cost estimate will be presented to the Board at the next meeting.

Mr. Jenkins reported that capacity for the Global (“Global”) development and the Rutherford Apartments is contingent on GUD installing a package plant and restoring District’s capacity. He also reported on discussions with GUD’s engineer and the possibility of GUD obtaining a package plant expansion of the regional Wastewater Treatment Plant, which will enable the District to proceed with development. He discussed GUD’s inability to tie into Tidwelll Lakes and issues that being addressed by GUD to reach a settlement with the developer to proceed with tie-in . President McNeil asked how this will affect the District and its ability to respond to requests for new development. Mr. Jenkins explained that when GUD obtains a source for their own capacity, the District’s capacity will be returned and the District will be able to serve new development. President McNeil expressed concerns about Parkway’s capacity in the interim until package plant is up and running. Mr. Jenkins responded that GUD has a maximum amount of the District’s capacity that they cannot exceed. Mr. Jenkins noted that he will monitor the District’s capacity to ensure that additional capacity is not used leaving the District with a lesser amount than anticipated. Ms. Bacon discussed letters, minutes and research on the proposed capacity lease agreement. She also confirmed that GUD is still paying for the District’s capacity. Mr. Jenkins stated that he will contact Global and Ruthford Apartments on the status of available capacity. Director Rettig reminded Mr. Jenkins that Global plans to break ground by October 2019. Mr. Jenkins reiterated his previous suggestion for Global to install a spray septic system. Mr. Jenkins also discussed negotiating a wet haul agreement with Global until Lift Station No. 2 improvements are constructed, which will allow Global to move forward with the proposed gas station and Burger King. Mr. Jenkins stated that he does not want to enter into a wet haul agreement for more than 6-9 months and does not normally recommend this scenario unless absolutely necessary, especially if alternative for service is delayed (i.e. capacity availability). He said that he reviewed the agreement with Rutherford Apartments for capacity and the same will be applied to Global. Director Balderas asked about funding for Lift Station No. 2 improvements and Mr. Jenkins stated that cost estimates will be presented next month.

Discussion ensued regarding the proposed movement of Lift Station No. 2 from the front of the church property to the back. Ms. Bacon suggested a proposed formal agreement between the Church and District for a donation of land to the District to move Lift Station No. 2 from the front to back of church and District would provide the Church a parking lot. Ms. Bacon stated that upon receipt of the files from the previous attorney a search for a formal agreement will be researched.

Mr. Jenkins reported on a discussion with Mr. Wilson regarding District capacity and discussed some alternatives for Wastewater Treatment Plant capacity. Facilities along Tidwell Road are not sufficient to provide capacity for Global’s full development and property across Beltway 8. Mr. Jenkins asked the Board about consideration to construct a District wastewater treatment plant to serve land on the other side of Beltway 8; however, the District would still participate in the regional Wastewater Treatment Plant with GUD. He stated that currently the Bond Application Report provides expansion to 1,125,000 gallons per day; and it will need to reflect a revised capacity in the regional Wastewater Treatment Plant to 645,000 gpd. He reported the District will save the cost for construction of a force main on Tidwell Road. Mr. Jenkins said that at this time next month GUD engineers will be 30% complete on the expansion design, therefore the District will need to determine sooner rather than later if it chooses to make a change in the regional Wastewater Treatment Plant expansion, which will be complete by 2021. Discussion ensued regarding protests that may require additional legal expenses. Mr. Syzek asked about the probability of connecting to the Tidwell Lakes Wastewater Treatment Plant and Mr. Jenkins responded that there is not enough site to build sufficient expansion. Mr. Jenkins discussed concerns about going over 100% capacity without a letter from the TCEQ. The Board requested that J|C provide costs for a Force Main and for an individual wastewater treatment plant. Mr. Jenkins noted the cost variance is minimal The Board requested a cost comparison of all the options. The Board requested a special meeting to discuss the options.

Discussion ensued regarding alternatives for moving the gate and fencing at the Water Plant to meet TCEQ requirements for security.

9. Discuss insurance renewal. The Board considered renewal of insurance with McDonald and Wessendorff Insurance, a copy of which is attached as Exhibit F. Mr. Jenkins reported that the replacement value of the District’s facilities were previously substantially undervalued and need to be updated. Also, there was an increase in the flood insurance deductible. Discussion ensued. Upon motion by Director Woods, seconded by Director Balderas, after full discussion and the question being put to the Board, the Board voted unanimously to approve the insurance proposal as presented.

Ms. Presser asked the Board about cyber liability insurance for the District’s web site and the Board requested that Ms. Presser obtain a quote from McDonald and Wessendorff.

10. Other matters. The Board discussed reducing their meeting schedule from two meetings to one and change the date and time. It was the consensus of the Board to change its regular meeting date and time to the second Wednesday of each month at 6:15 p.m., subject to availability of Mr. Wilson and Seargent Ganey. Ms. Presser will follow up with Seargent Ganey.

THERE BEING NO FURTHER BUSINESS TO COME BEFORE THE BOARD, the meeting was adjourned.
* * *
The foregoing minutes were passed and approved by the Board of Directors on March 19, 2019. 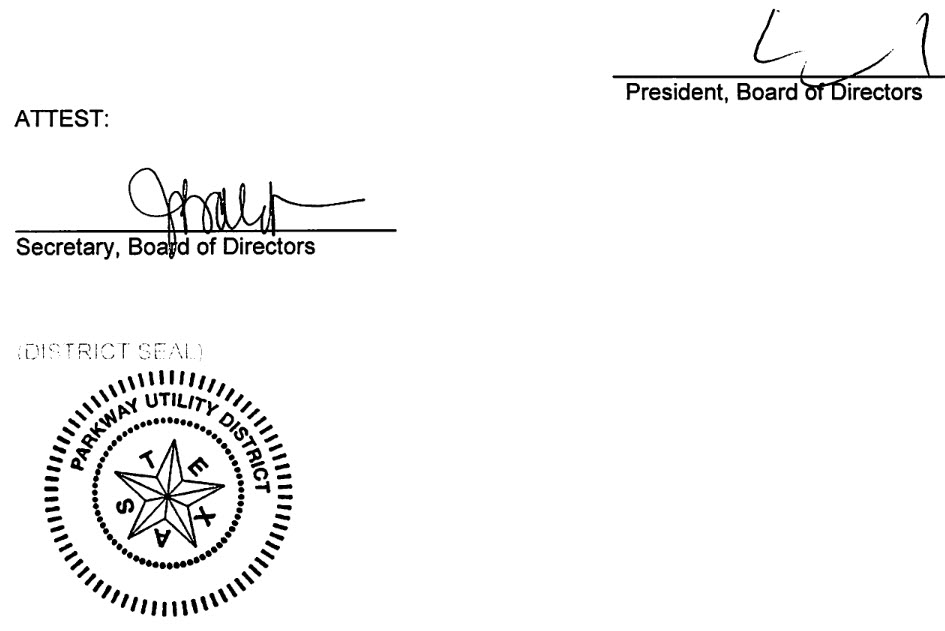