3. Tax Assessor and Collector’s Report, status of delinquent tax accounts, and payment of bills. Ms. Silva presented to and reviewed with the Board the Tax Assessor-Collector’s Report for January, a copy of which is attached hereto as Exhibit B. Ms. Silva reported that 90.86% of the District’s 2018 taxes have been collected as of February 28, 2019.

Ms. Silva reviewed the Delinquent Tax Report from the District’s delinquent tax attorneys. She discussed outstanding delinquent accounts and the procedure for collection. She noted that no action is required by the Board.

Upon motion by Director Rettig seconded by Director Woods, after full discussion and the question being put to the Board, the Board voted unanimously to approve the Tax Assessor-Collector’s Report, and to authorize the expenditures listed therein.

Mr. Jenkins noted that J|C reviewed the joint facilities’ invoices from A&S Engineering, including incorrect percentages for the District’s pro rata share on the design costs. He reported that the invoices approved by the Board reflect the correct amount due to the District.

Upon motion by Director Rettig, seconded by Director Balderas, after full discussion and the question being put to the Board, the Board voted unanimously to approve the Bookkeeper’s Report, to authorize payment of check nos. 9751 to 9910 in the amounts and for the purposes listed therein.

1. Operator’s Report and hearing on delinquent accounts. President McNeil recognized Mr. Browne, who presented to and reviewed with the Board the Operations Report for February, 2019, a copy of which is attached hereto as Exhibit D. He noted that 92% of the water pumped was billed for the period from January 15, 2019 to February 15, 2019.

Mr. Browne reviewed maintenance and repairs for January 2019 of the District’s individual and joint facilities. Mr. Jenkins reported that J|C also performs inspections on Water Plant facilities pursuant to criteria set forth by the Texas Commission on Environmental Quality, and requested that the Board consider J|C for this service next year.

Mr. Brown reported that flow exceeded the permitted amount at the Wastewater Treatment Plant. He also noted that excess groundwater was pumped due Greenwood’s shut down of the Surface Water Plant to resolve issues.

Mr. Brown stated that MDS received call from Forest Park Apartments to provide assistance in locating and identifying water and sewer lines. He noted that MDS prepared estimated costs for $3,000 and $3,500 for two excavation options to locate the lines. A copy of the MDS Estimate is attached to the Operator’s Report.

Mr. Browne updated the Board on the deteriorated manhole at Tidwell Road and Deep Valley Drive. He presented and reviewed proposals for rehabilitation and repair of the manhole from Tackle Construction Co., Inc. in the amount of $10,800.00, plus an additional $1,200.00 for exploratory work; CDC Unlimited, LLC in the amount of $7,900.00; and Camino Services in the amount of $11,1950.00. He recommended awarding the contract to CDC Unlimited, LLC. Discussion ensued regarding additional activity at the same location. Mr. Syzek reported that there was a dip on Tidwell Road. He thought it was a District issue because of some previous work performed by the District in that area. Mr. Browne reported that MDS investigated this issue and first performed a dye test on the sinking area, then performed a televised inspection of the sanitary and storm sewer lines. He stated that breakage was found on the storm sewer line where infiltration was identified and that Harris County was notified of the breakage. Mr. Browne reported that he met with Mr. Torres of Harris County and delivered a DVD of the televising and discussed the issue. He noted that Mr. Torres and other officials of Harris County will discuss and review the DVD of the televised lines.

Mr. Brown requested that the Board authorize termination of 118 delinquent accounts in accordance with the District’s Rate Order and to authorize MDS to the write off accounts for collection in the amount of $587.44.

Upon motion by Director Rettig, seconded by Director Balderas, after full discussion and the question being put to the Board, the Board voted unanimously to approve the Operator’s Report; to terminate 118 delinquent accounts in accordance with the District’s Rate Order, to authorize MDS to write off accounts to collection in the amount of $587.44; and to approve the proposal from CDC Unlimited LLC in the amount of $7,900.00 for repairs and maintenance of the manhole located at Tidwell Road and Deep Valley Drive.

5. Engineer’s Report, including review of Engineer’s projects, and capital repairs. Mr. Jenkins presented to and reviewed with the Board the Engineer’s Report, a copy of which is attached hereto as Exhibit E.
Mr. Jenkins reported that the Texas Commission on Environmental Quality (“TCEQ”) approved the District’s request to declare the Water Plant Improvements as an emergency project, the Change Order to include the necessary structural work at the Water Plant’s facilities, and bypassing the bidding requirements for the project. Mr. Jenkins discussed fencing improvements at the Water Plant facility to comply with TCEQ criteria and will bring a proposal to the next meeting.

Mr. Jenkins updated the Board on a cost estimate for Lift Station No. 2 and consideration for moving the lift station to the rear of the church’s property in exchange for the District providing a parking lot for the church in place of the old lift station site. He discussed a proposed meeting with the City of Houston to determine if the District will be allowed to utilize the existing lift station for increasing the flow or if a new lift station will be required.

Mr. Jenkins presented and reviewed an updated Emergency Preparedness Plan. Discussion ensued regarding distribution. Upon motion by Director Rettig, seconded by Director Balderas, after full discussion and the question being put to the Board, the Board voted unanimously to approve the updated Emergency Preparedness Plan and authorize distribution to appropriate parties.

Mr. Jenkins reported on meetings with the engineer for Greenwood Utility District (“GUD”) and reviewed the items of discussion, as summarized in the Engineer’s Report from A&S and attached as Exhibit E-1.

Mr. Jenkins discuss preparation of project worksheets for District and joint facility projects that would detail funding sources, provide budgets for all ongoing projects and would be updated monthly. Copies of the project budgets and charts are attached to the Engineer’s Report.

8. Approve Resolution Changing Meeting Date. Ms. Bacon reported that at the last meeting the Board discussed consolidating its meetings and changing its regular meeting date to the second Wednesday of every month at 6:15 p.m. She noted that the Board may need to hold special meetings from time to time to conduct certain business. Discussion ensued. Ms. Presser noted that she followed up with Sergeant Ganey and Mr. Wilson regarding availability for the newly proposed meeting date and time and both confirmed availability. Upon motion by Director Everhart, seconded by Director Balderas, after full discussion and the question being put to the Board, the Board voted unanimously to approve the Resolution Changing Regular Meeting Date and Time to the second Wednesday of every month at 6:15 p.m. A copy is attached as Exhibit H.

Mr. McDonald discussed the District’s request for a Cyber Liability policy in relation to the District’s web site. He reported on some items that have been identified as a red flag and introduced Ms. Dailey to provide more extensive discussion on Cyber Liability. Ms. Dailey reported on types of breach, privacy protection, and exposure. She reviewed the policy’s assistance and process if a breach is suspected. It was the consensus of the Board to defer action.

President McNeil reported on a previous agreement with Forest Park Apartments in which the District agreed to reduce rates to provide some relief for collecting sufficient utility costs from a severely reduced amount of occupants. President McNeil discussed the financial struggles that Forest Park is still experiencing, due to low occupancy, and for repairs resulting from Hurricane Harvey damage. Discussion ensued and NRF stated that they will follow up to locate evidence of an agreement between the District and Forest Park Apartments for reduced rate terms. 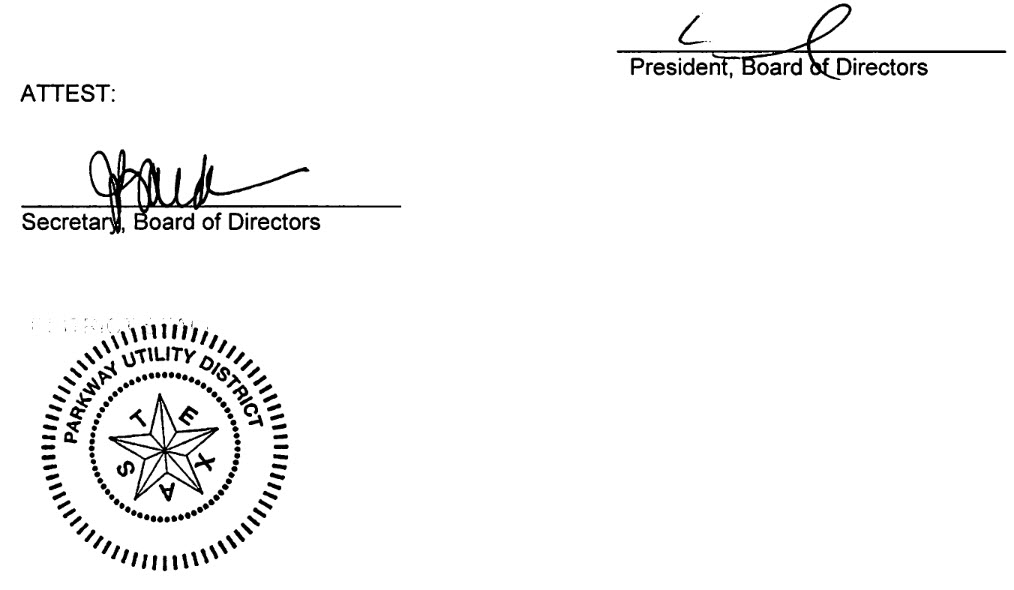