1. Public Comments. No comments were received by the Board.

2. Minutes of previous meeting(s). Minutes of the meeting of April 10, 2019, previously distributed to the Board, were presented for consideration and approval. Upon motion by Director Rettig, seconded by Director Everhart, after full discussion and the question being put to the Board, the Board voted unanimously to approve the minutes as presented.

Mr. Syzek reviewed ATV damage at the District’s detention facilities, as illustrated in the photographs on page 3 of the Systems Project Management report. He recognized Ms. Sears, who presented and reviewed a report from Storm Water Solutions, a copy is attached as Exhibit C. She updated the Board on the status of installation of bollards at Stonefield Manor and Sunrise Pine Detention Ponds.

Mr. Syzek then continued the review of the System Project Management Report regarding parking and lighting issues at the administration building. Discussion ensued.

4. Report from Direct Waste Solutions. President McNeil recognized Mr. Singleton, who reported on recycling. The Board reported on trash and recycling debris left on the ground after collection. Discussion ensued regarding collection procedures, acceptable recyclable items and ideas to educate customers of appropriate items to recycle. Director Rettig reported there is a box outside the District’s administration building for residents to pick up a flyer regarding acceptable items for recycling collection.

5. Report by Harris County Precinct Three Constable, including community Crime Watch, and action relating to Security. The Security Report for the month of April 2019 was previously distributed to the Board. A copy of the Security Report is attached as Exhibit D.

6. Authorize preparation and filing of Continuing Disclosure Report for fiscal year end December 31, 2018. President McNeil recognized Mr. Wilson, who reported that the District has covenanted to disclose annual financial information to bondholders. He stated that this information is filed on EMMA, which is the electronic filing portal for the Municipal Securities Rulemaking Board. Upon motion by Director Rettig, seconded by Director Everhart, after full discussion and the question being put to the Board, the Board voted unanimously to authorize the preparation and filing of the District’s Continuing Disclosure Report.

7. Tax Assessor and Collector’s Report, status of delinquent tax accounts, and payment of bills. Ms. Yanez presented to and reviewed with the Board the Tax Assessor-Collector’s Report for April, a copy of which is attached as Exhibit E. Ms. Yanez reported that 97.59% of the District’s 2018 taxes have been collected as of April 30, 2019.

Upon motion by Director Everhart seconded by Director Rettig, after full discussion and the question being put to the Board, the Board voted unanimously to approve the Tax Assessor-Collector’s Report and to authorize the expenditures listed therein.

Mr. Wilson discussed receipt of an invoice from Radcliffe Bobbitt Adams Polley PLLC (“RBAP”) for final tasks related to the transition of records and information to NRF. Discussion ensued and the Board concurred to issue final payment to RBAP.

Mr. Jenkins noted that deficit annexation accounts will be brought current prior to approval of respective developer plans.
Upon motion by Director Rettig, seconded by Director Everhart, after full discussion and the question being put to the Board, the Board voted unanimously to approve the Bookkeeper’s Report, to authorize payment of check nos. 9959 to 10017 from the District’s General Operating Fund, including final payment to RBAP, and check nos. 1783 through 1785 from the District’s Construction Fund in the amounts and for the purposes listed therein.

8. Operator’s Report and hearing on delinquent accounts. President McNeil recognized Mr. Browne, who presented to and reviewed with the Board the Operations Report for April 2019, a copy of which is attached hereto as Exhibit G . He noted that 99% of the water pumped was billed for the period from March 15, 2019 to April 15, 2019.

Mr. Browne reviewed maintenance and repairs for April 2019 of the District’s individual and joint facilities.

Discussion ensued about when the District will have capacity and alternative options in the event Tidwell Lakes Wastewater Treatment Plant becomes unable to provide GUD with capacity.

Mr. Browne reported that the sample pulled for ammonia was high resulting in three violations, which has been corrected. He stated this happens time to time due to insufficient air flow.

Mr. Browne discussed deficiencies at the regional waste water treatment plant that include failed blower no. 2, expansion joint and 8” check valve and 12” valve. He reported that repairs will total $14,865.00 and the replacement cost is $29,000.00. Mr. Browne recommended repairs, totaling $14,865.00. Mr. Browne noted that GUD will be presenting these costs to its Board, as well.

Mr. Browne requested that the Board authorize termination of 198 delinquent accounts in accordance with the District’s Rate Order.

Mr. Browne reviewed a request from a customer for a bill adjustment related to an unusually high bill, a copy is attached to the Operations Report. A leak was detected and has been repaired. The customer requests the Board’s consideration for a reduction. It was the consensus of the Board for Mr. Browne to report to the customer that the Board consented to an adjustment.

Upon motion by Director Rettig, seconded by Director Everhart, after full discussion and the question being put to the Board, the Board voted unanimously to approve the Operator’s Report; to terminate 198 delinquent accounts in accordance with the District’s Rate Order; to approve recommended repairs at the regional wastewater treatment plant in the estimated amount of $14,865.00; and to authorize MDS to adjust the bill for the customer on Alex Springs Lane as discussed by the Board.

Mr. Browne distributed and reviewed options for inserts to the water bills concerning adverse effects with the disposal of wipes and grease. Copies are attached as Exhibit G-1. He suggested an insert of each option over the next four months. Upon motion by Director Rettig, seconded by Director Everhart, after full discussion and the question being put to the Board, the Board voted unanimously to approve and authorize distribution of the flyers on a rotating basis and install additional copies in the box outside administration building.

Mr. Jenkins updated the Board on Water Plant Improvements and requested approval for payment of Pay Estimate No. 8 in the amount of $44,658.00. He discussed piping modifications to the existing distribution lines and requested approval of Change Order No. 3 for an increase in the contract of $27,164.40. It was noted that Change Order No. 3 will be paid from proceeds of the Series 2014 Bonds.

Discussion ensued regarding completion of the project and Mr. Jenkins stated that the end of the summer is the anticipated goal. Upon motion by Director Rettig, seconded by Director Everhart, after full discussion and the question being put to the Board, the Board voted unanimously to approve Pay Estimate No. 8 in the amount of $44,658.00 and Change Order No. 3 for an increase in the construction contract of $27,164.40.

Mr. Jenkins reviewed an illustration of the proposed parking lot improvements on page 12 of the Engineer’s Report. He requested feedback from the Board for parking lot surface material for the area within the Water Plant fenced area. It was the consensus of the Board to consider crushed concrete for parking within the Water Plant area. The Board also discussed the layout of the modified parking spaces and requested re-configuration of the layout for additional spaces.

Mr. Jenkins reported that J|C has reviewed the Regional Wastewater Treatment Plant Operations and Maintenance Costs over the last six months resulting in the identification of billing errors. He requested the Board’s approval to coordinate with the bookkeeper to review invoices since the beginning of the lease agreement to determine if there are additional errors. Pending results, further investigation may need to be made on sludge hauling. Upon motion by Director Rettig, seconded by Director Everhart, after full discussion and the question being put to the Board, the Board voted unanimously to authorize the collaboration of the bookkeeper and engineer to review District records for the purpose of determining additional billing errors and recommending solutions.

Upon motion by Director Rettig, seconded by Director Everhart, after full discussion and the question being put to the Board, the Board voted unanimously to approve the Engineer’s Report.

10. Report from Financial Advisor. Mr. Blitch reported on changes in interest rates and discussed parameters to determine if the District meets the test for net effective savings for the issuance of refunding bonds. He will present scenarios next month.

11. Building Superintendent’s Report. No report was presented to the Board.

THERE BEING NO FURTHER BUSINESS TO COME BEFORE THE BOARD, the meeting was adjourned.
* * *
The foregoing minutes were passed and approved by the Board of Directors on June 12, 2019.

President, Board of Directors 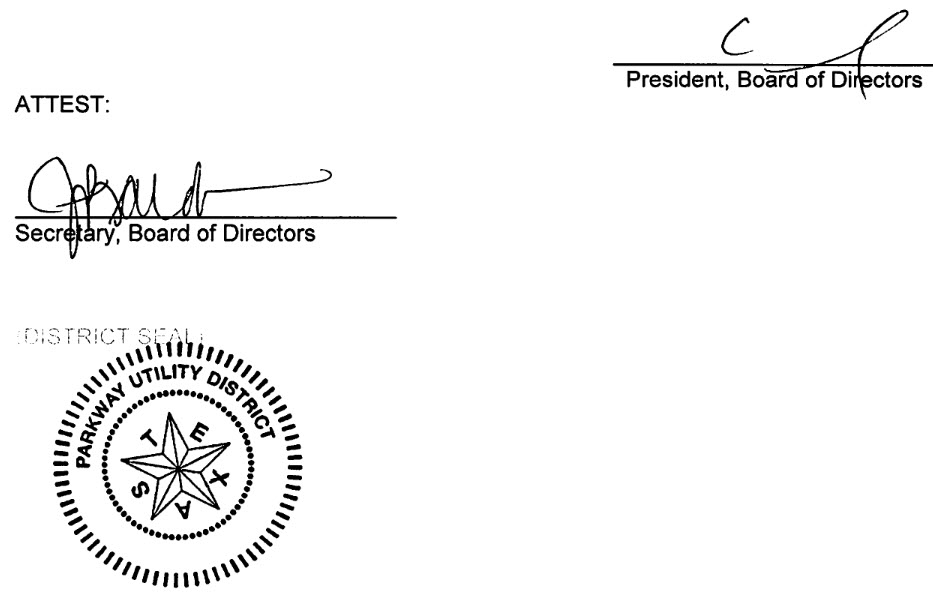