1. Public Comments. President McNeil recognized Mr. Sasson who addressed the Board to request a letter from the District to the TCEQ confirming the District has an interconnect with Tidwell Wastewater Utility, LLC (“Tidwell”) and will provide emergency water supply pursuant to a previous written agreement between the District and Tidwell. Mr. Wilson reported that the previous agreement was temporary and has since expired. Discussion ensued regarding Tidwell’s power source in the event of an emergency and inability to reciprocate as an emergency water supply for the District until a back-up power source is identified. Mr. Jenkins discussed the requirements of the TCEQ regarding Emergency Preparedness Plan. Mr. Sasson was unable to confirm that a back-up power source is in place at his facility. No action was taken by the Board.

2. Minutes of previous meeting(s). Minutes of the meeting of May 8, 2019, previously distributed to the Board, were presented for consideration and approval. Upon motion by Director Rettig, seconded by Director Woods, after full discussion and the question being put to the Board, the Board voted unanimously to approve the minutes as presented.

3. Report from Direct Waste Solutions. President McNeil recognized Mr. Singleton, who reported that an audit of participation by residents in the District’s recycling program was performed and remains steady at about 50%. He asked for the Board’s patience during this busy season as workers acclimate to the heat and collections are taking more time due an extraordinary amount of waste since school is out.

Mr. Syzek reported receiving a few customer concerns regarding tree trimming along the walking trails. He next presented and reviewed a quote from Texas GroundWorks Management, Inc., a copy is attached as Exhibit B-1 The cost to raise canopies of trees and trim the inside to open them up is approximately $7,500, installation of missing corrugated pipes at the base of tree trunks is approximately $2,300.00, and to spray herbicide on decomposed granite gravel sidewalk is approximately $1,300.00 for a total estimated cost of $11,100.00. Mr. Syzek noted that he reached out to Storm Water Solutions to apply herbicide along the fence line because the area was too narrow for equipment to remove. Ms. Sears stated that Storm Water Solutions will apply the herbicide along the fence line. She noted that this service is within the scope of services that Storm Water Solutions provides to the District. Upon motion by motion by Director Balderas, seconded by Director Rettig, after a full discussion and the question being put to the Board, the Board voted unanimously to approve the Estimate from Texas GroundWorks Management, Inc. to perform the tree trimming and install missing corrugated pipes at the base of tree trunks, as described in the Estimate, for a total estimated cost of $9,800.00.

Mr. Syzek reported on a tree that has intruded into the District’s storm water pipe, as illustrated on page 4 of his report. Ms. Sears reported that Storm Water Solutions can remove the tree for an estimated cost of $500.00. President McNeil asked if it is within the scope of services for Storm Water Solutions to extract or remove any young trees prior to maturity to prevent damages to the District’s storm water facilities. Ms. Sears stated that she would notify the field representatives to monitor any potential intrusions.

Mr. Syzek reported on positive feedback from residents in Stonefield Manor regarding installation of the bollards and cables to discourage ATV traffic at the detention pond site. He stated that Storm Water Solutions will be installing No Trespassing signs.

Ms. Sears presented and reviewed a report from StormWater Solutions, a copy is attached as Exhibit C. She presented and reviewed a proposal to install bollards and cables at the Sunrise Pines detention site to discourage access by ATV traffic for an estimated cost of $3,055.00. Upon motion by motion by Director Balderas, seconded by Director Everhart, after a full discussion and the question being put to the Board, the Board voted unanimously to approve the proposal to install bollards and access cables at the Sunrise Pines detention pond site for a cost of approximately $3,055.00.

5. Report by Harris County Precinct Three Constable, including community Crime Watch, and action relating to Security. President McNeil recognized Sargent Ganey, who reviewed the Security Report for the month of May 2019, which was previously distributed to the Board. A copy of the Security Report is attached as Exhibit D. Discussion ensued on police activity associated with ATV on District property. He asked the Board’s permission for the contract deputies to have a key to the administration building to use the restroom facilities due to increased issues with public facilities. Director Rettig will coordinate with the Constable’s office on this request.

6. Tax Assessor and Collector’s Report, status of delinquent tax accounts, and payment of bills. Ms. Yanez presented to and reviewed with the Board the Tax Assessor-Collector’s Report for May, a copy of which is attached as Exhibit E. Ms. Yanez reported that 97.44% of the District’s 2018 taxes have been collected as of May 31, 2019.

Upon motion by Director Balderas seconded by Director Rettig, after full discussion and the question being put to the Board, the Board voted unanimously to approve the Tax Assessor-Collector’s Report and to authorize the expenditures listed therein.

Ms. Yanez reported that preliminary values have been received in the amount of $386,249,050, which includes 2018 personal property and the preliminary value is presented prior to protests and certification.

Upon motion by Director Rettig, seconded by Director Balderas, after full discussion and the question being put to the Board, the Board voted unanimously to approve the Bookkeeper’s Report, to authorize payment of check nos. 10018 to 10078 from the District’s General Operating Fund, and check nos. 1786 through 1788 from the District’s Construction Fund in the amounts, to the persons, and for the purposes listed therein.

8. Operator’s Report and hearing on delinquent accounts. President McNeil recognized Mr. Browne, who presented to and reviewed with the Board the Operations Report for May 2019, a copy is attached as Exhibit F. He noted that 103% of the water pumped was billed for the period from April 15, 2019 to May 15, 2019.

Mr. Browne reviewed maintenance and repairs for May 2019 of the District’s individual and joint facilities.

Mr. Browne reported that 4,649,338 gallons were transferred from Greenwood Utility District (“GUD”) to the Tidwell Lakes Wastewater Treatment Plant for the month of May, which averages to approximately 150,000 gpd.

He reported that 30% of the persons accessing the website read the flyer regarding “The Dos and Don’ts of Your Kitchen and Bathroom.”

Mr. Browne reported that Lift Pump No. 1 at the onsite lift station at the regional Wastewater Treatment Plant sucked in some foreign object damaging the impeller. He reviewed a quote from NTS for repairs in the amount of $5,710.00 with a one year warranty and replacement cost is approximately $17,786.00 with a five-year prorated warranty. No action was requested of the Board.

Mr. Browne requested that the Board authorize termination of 158 delinquent accounts in accordance with the District’s Rate Order. Upon motion by Director Woods, seconded by Director Rettig, after a full discussion and the question being put to the Board, the Board voted unanimously to terminate delinquent accounts in accordance with the terms of the District’s Rate Order.

Mr. Browne discussed issues with a manhole located at 12635 Drifting Winds and recommended rehabilitation of the upper section and interior of the manhole. Mr. Browne presented a quotes from Tackle Construction for $6,080.00 and CDC Unlimited for $6,100.00.

Copies of the proposals are attached to the Operations Report. Upon motion by Director Rettig, seconded by Director Woods, after a full discussion and the question being put to the Board, the Board voted unanimously to approve the proposal from CDC Unlimited for $6,100.00.

Mr. Browne reported that the District is scheduled to perform its annual fire hydrant inspection and flushing and that notices have been distributed to residents. He will present a comprehensive report on flushing and recommended repairs on the fire hydrants upon completion of the inspection.

9. Annual Review of Rate Order. Mr. Wilson reported this item was on the District’s agenda calendar and stated that NRF does not have any recommended changes. Mr. Blitch reported there was consideration a few months ago to make some revisions to the rates. Discussion ensued regarding revenue from the Forest Park apartments. The Board requested that the attorney review the District’s agreement with Forest Park regarding rates and suggested inviting a representative to the next meeting. Mr. Wilson stated that NRF will reach out and invite a representative to the District’s meeting next month.

Mr. Jenkins updated the Board on Water Plant Improvements and requested approval for payment of Pay Estimate No. 9 in the amount of $154,810.08. He reported that the valves on the water well discharge line and distribution piping need to be replaced due to internal leaking to the pipe. He also reported that the electrical service pole is rotted below grade and needs to be replaced before electrical equipment can be installed. He presented and requested approval of Change Order No. 4 for an increase in the contract of $9,124.00. It was noted that Change Order No. 4 will be paid from proceeds of the Series 2014 Bonds. Upon motion by Director Rettig, seconded by Director Everhart, after full discussion and the question being put to the Board, the Board voted unanimously to approve Pay Estimate No. 9 in the amount of $154,810.08 and Change Order No. 4 for an increase in the construction contract of $9,124.00.

Mr. Jenkins reviewed a revised layout of the proposed fence and parking lot improvements, as illustrated in the Engineer’s Report. The Board discussed security issues and concurred to defer action on this matter pending a walk about the property to determine if an alternative layout it feasible.

Mr. Jenkins discussed improvements to Lift Station Nos. 1 and 2 and requested the Board visit the sites to discuss which projects the Board would like to include in the Bond Application. The Board discussed visiting the Water Plant site for parking options and the Lift Station sites as recommended.

Mr. Jenkins reported on the status of the Bond Application Report subject to receipt of Amendment to Regional WWTP Agreement. Mr. Wilson said he is happy to review the agreement with the Board to answer any questions. Discussion ensued and the Board agreed to hold a special meeting to review the Bond Application Report and Amendment to Regional WWTP Agreement.

Mr. Jenkins reported on a discussion J|C had with the Pastor of Parkway Baptist Church regarding Lift Station No. 2 expansion requirements. He stated that the Pastor is willing to coordinate with the District to convey the additional Lift Station site, but will need to discuss the requirements with the church’s building committee.

Upon motion by Director Balderas, seconded by Director Rettig, after full discussion and the question being put to the Board, the Board voted unanimously to approve the Engineer’s Report.

11. Report from Financial Advisor. Mr. Blitch discussed consideration for a proposed refunding and stated there is not sufficient available bonds to meet the net present value requirement of 3%. He reported that he was notified that S&P changed the District’s rating from BBB+ to BBB, which will result in insuring the upcoming bond issue to get a higher rating. Mr. Blitch noted that he will file an event notice on EMMA.

12. Building Superintendent’s Report. No report was presented to the Board.

The foregoing minutes were passed and approved by the Board of Directors on July 10, 2019. 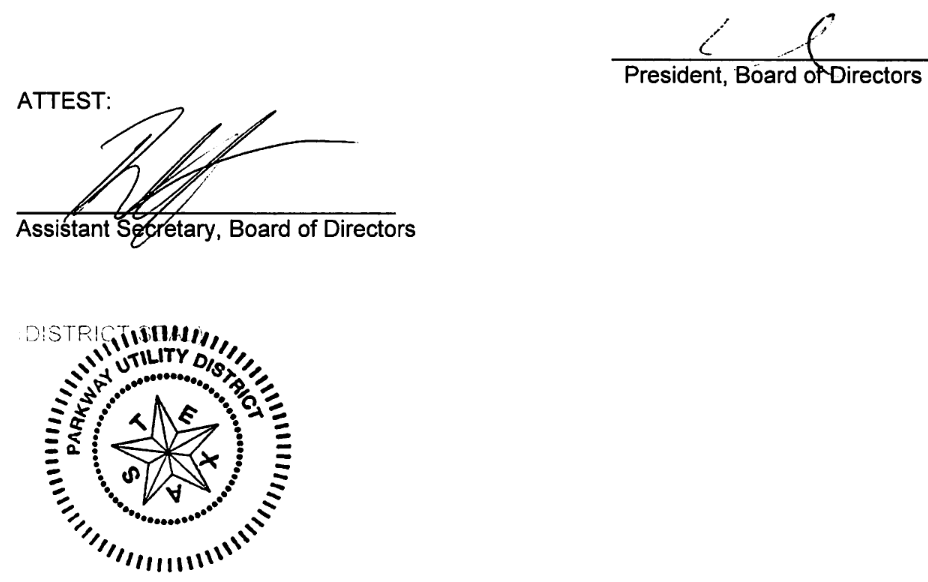