1. Receive Financial Advisor’s Tax Rate recommendation for 2019. President McNeil recognized Mr. Blitch, who reviewed a tax rate analysis related to the Bond Application Report for Series 2019 Unlimited Tax Bonds, a copy is attached as Exhibit B. He reported that upon submission of the bond application, he will reconfigure the tax rate analysis concurrent with market activity at the time the District decides to sell bonds. Mr. Blitch reviewed SB 2, explaining that he believes that 95% buildout represents the number of equivalent single family connections for build-out in the District. He discussed consequences of a rollback election, noting that the tax rate multiplied by the average home value cannot exceed an 8% increase in maintenance tax for 2019 or else residents could petition to have a rollback election. For tax year 202, the tax rate multiplied by the average home value cannot exceed a 3.5% increase in taxes or else a mandatory rollback election would occur. He recommended a Maintenance and Operation tax rate of $0.189 and debt service tax rate of $0.564 for a total tax rate of $0.753 for 2019. He stated that the recommended Maintenance and Operation Tax should not result in a rollback tax election for the 2019 tax year because the proposed tax roll represents an increase in taxable value of 12.32%, which results in a rollback rate of $0.18981.

2. Discuss Bond Application Report. The Board received a copy of an updated Summary of Costs for Bond Issue No. 16, a copy of which is attached as Exhibit C. Mr. Jenkins discussed and reviewed items 1-5 on Exhibit C, noting that these are combined projects for costs shared by Greenwood Utility District (“GUD”) and the District. He stated that items 6-10 listed on Exhibit C will be paid solely by the District. Discussion ensued regarding the costs for the Surface Water Transfer Facility and the District’s responsibility as a shared facility with GUD. Following discussion, Mr. Jenkins reiterated that items 1-5 are shared costs between the District and GUD and items 6-10 are District projects for which the District will bear the costs.

Mr. Jenkins noted the costs for sanitary sewer rehabilitation is based on J|C’s best judgment as a design professional familiar with the construction industry and J|C cannot guarantee that bids will not vary from the cost estimate due to labor, materials and equipment costs or market conditions or other variables that affect the final bid price. He stated that additional costs will be assessed upon a review of the videos and determination of recommended repairs, which he anticipates to cost approximately $2,000,000 for only the older sections in the District. Mr. Jenkins said that the videos have been preliminarily reviewed, and it appears that substantial repairs will be required. Repair recommendations will be presented in approximately 60-90 days. He said that the bond issue includes all of the projects that the engineer feels are of necessity to the District.

The Board discussed Water Plant Improvements and concerns with the modifications to the elevations of the Motor Control Center Building (“MCC”) and generator foundation regarding integrity of structure with concrete being poured over applied and cured existing concrete. Mr. Jenkins reported that the contractor has been advised that they will be responsible for all of the costs to raise the elevation level of the MCC building to the correct height by constructing an interior concrete floor on top of the existing floor, including additional structural engineering design. Director Balderas asked who is the structural engineer and Mr. Jenkins responded that the structural engineer is with Jones|Carter. President McNeil asked about the warranty and if the District can get an extended warranty for the modifications to the floors that were incorrectly constructed. Mr. Jenkins stated that the same warranty applies to the modified and corrected concrete floors as for the entire project, which is one year. The Board discussed the previous Change Order that was approved for an additional contract cost and to change the elevation, which was not done. The Board expressed concerns with concrete not withstanding over a period of time and sound enough to hold the weight of the hydro-pneumatic tank. Mr. Jenkins stated that he is unaware of anything that was performed incorrectly. The Board talked about project management and overseeing the contractor’s work and following the design plan prepared by J|C. It was the consensus of the Board that the floors or platforms that were incorrectly constructed should be demolished and constructed correctly. No action was taken on this discussion.

Mr. Syzek stated that Lift Station No. 1 Rehabilitation can be deferred without causing any operational issues and does not necessarily have an immediate need to be included in Bond Application Report No. 16. Mr. Jenkins stated that the engineer recommended including this project in the bond application due to its age, but was open to removing it from the bond application if the Board so desires. He stated the same for the sanitary sewer rehabilitation, however, he emphasized that review of the videos is not complete and could result in significant repair costs to which the district is unable to fund without bond proceeds.

The Board asked about selling the bonds at two different times, to which Mr. Blitch responded that upon approval by the TCEQ, the District has one year to sell the remaining bonds with the ability to request extensions. He discussed costs for a Bond Anticipation Note (“BAN”) and the necessity to pay the City of Houston the District’s share of water impact fees by December 31, 2019. Mr. Jenkins stated that no projects can proceed until bonds are sold.

Upon a complete review of videos, J|C will provide detailed reports, photographs, and detailed cost estimates of repairs by priority. Mr. Syzek suggested that J|C host a viewing of the videos at J|C’s office. Mr. Jenkins agreed.

Mr. Jenkins, reviewed detailed cost breakouts for Lift Station Nos. 1 and 2 Rehabilitation and Expansion, copies of which are attached as Exhibit C-1 and C-2. Discussion ensued. Upon motion by Director Balderas, seconded by Director Wood, after a full discussion and the question being put to the Board, the Board voted approve Bond Application Report No. 16 in the amount of $19,065,000 and authorize J|C to file with the TCEQ on an expedited review.

Mr. Jenkins discussed a Change Order regarding an electrical panel at the Water Plant. The Board declined to discuss and requested that this request be presented at the next meeting.
THERE BEING NO FURTHER BUSINESS TO COME BEFORE THE BOARD, the meeting was adjourned.

* * *
The foregoing minutes were passed and approved by the Board of Directors on September 11, 2019. 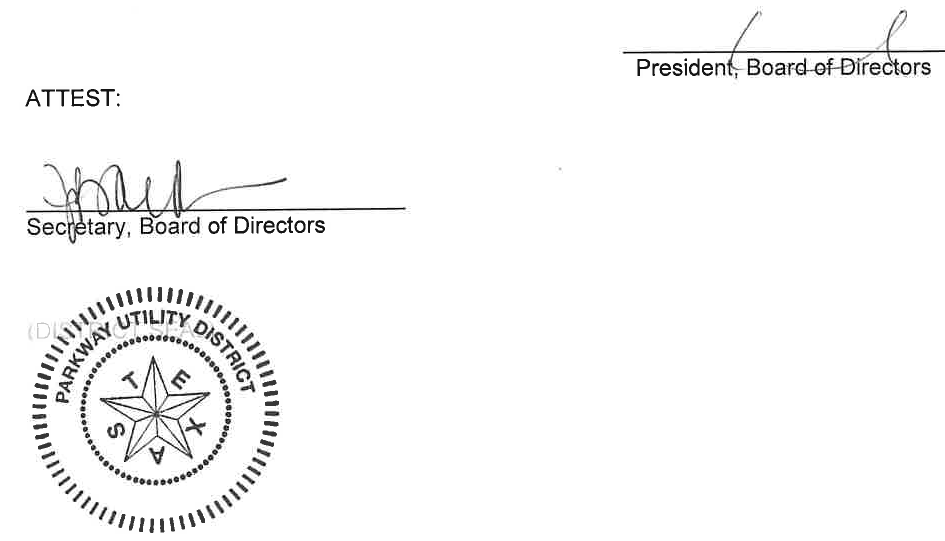