The Board of Directors (the “Board”) of Parkway Utility District (the “District”) met in a regular session, open to the public, at 12843 Tidwell Road, Houston, Texas, at 6:15 p.m. on September 11, 2019, whereupon the roll was called of the Directors, to wit:

1. Public Comments. President McNeil opened the floor for comments and recognized Ms. Beveridge of Stonefield Terrace, who reported on park improvements and reviewed photographs, a copy is attached as Exhibit B. She noted that approximately $46,000 was invested in park construction and improvements, and the residents are utilizing the improvements and there is increased activity. She also expressed appreciation for the Board’s consideration and stated that a parking pad is needed.

3. Report from Direct Waste Solutions. President McNeil recognized Mr. Singleton, who reported on the status of recycling. Director Balderas appreciated the distribution of notices to residents requesting that waste receptacles be placed closer to the curb to expedite service. Mr. Singleton reported on action to tag receptacles that movement to the curb would be appreciated and the action expedites pick-up. No action was requested of the Board.

4. Report from Systems Project Management. President McNeil recognized Mr. Syzek, who reviewed and presented the District’s General Manager’s Report, a copy is attached as Exhibit C. He discussed photographs of where ATVs are gaining access to detention facilities in Stonefield.

Discussion ensued regarding increased mobility in connection with the location of the new high school and football stadium. President McNeil discussed a conversation with Rodney Ellis’ office and a proposed town hall meeting to discuss the issue among affected communities.

He noted a seminar hosted by the District’s engineers and two other vendors regarding cyber security on Saturday, September 14, 2019.

6. Report by Harris County Precinct Three Constable, including community Crime Watch, and action relating to Security. President McNeil recognized Sargent Ganey, who reviewed the Security Report for the month of August 2019, which was previously distributed to the Board. A copy of the Security Report is attached as Exhibit E. He introduced Sargent Sullivan and Deputy Trujillo and reported on officer’s shifts and coverage for the District.

7. Discuss additional security cameras at the Water Plant. Mr. Browne on receipt of a proposal from Zaladium, and requested the Board’s consideration to invite them for a presentation. Director Rettig requested that the administration building be included in the presentation.

9. Tax Assessor and Collector’s Report, status of delinquent tax accounts, and payment of bills. Ms. Yanez presented to and reviewed with the Board the Tax Assessor-Collector’s Report for August, a copy of which is attached as Exhibit H. Ms. Yanez reported that 98.30% of the District’s 2018 taxes have been collected as of August 31, 2019.

Upon motion by Director Balderas, seconded by Director Rettig, after full discussion and the question being put to the Board, the Board voted unanimously to approve the Tax Assessor-Collector’s Report, to authorize the expenditures listed therein, and authorize the District’s delinquent tax attorney to coordinate with MDS to terminate service to delinquent tax accounts.

Upon motion by Director Rettig, seconded by Director Balderas, after full discussion and the question being put to the Board, the Board voted unanimously to approve the Bookkeeper’s Report, to authorize payment of check nos. 10210 to 10262 from the District’s General Operating Fund, and check nos. 1802 through 1804 from the District’s Capital Projects Fund in the amounts, to the persons, and for the purposes listed therein.

11. Discuss modified rates for Forest Park Apartments, and receive update on occupancy. Mr. Wilson reported that the District was previously approached by Ms. Ashworth requesting the Board’s consideration to reduce rates for Forest Park Apartments during renovation and low occupancy period. She expressed concerns about disparity in increases to residential customers versus multi-family facilities. Mr. Wilson stated that he will follow up and leave this matter on the agenda for a resolution next month regarding multifamily use rates and deferring full costs to October.

12. Operator’s Report and hearing on delinquent accounts. President McNeil recognized Mr. Browne, who presented to and reviewed with the Board the Operations Report for August 2019, a copy is attached as Exhibit J. He noted that 98% of the water pumped was billed for the period from July 15, 2019 to August 15, 2019.

Mr. Browne reviewed maintenance and repairs for August 2019 of the District’s individual and joint facilities.

Mr. Browne reported that 4,900,096 gallons were transferred from Greenwood Utility District (“GUD”) to the Tidwell Lakes Wastewater Treatment Plant for the month of August.

Mr. Browne discussed illegal connections to the District’s water system by a customer at 13027 Nature Trail. He reported that service had been terminated, it was re-connected by a source other than MDS, the meter was pulled by MDS on three occasion, and was replaced by an alternate source. The Board discussed additional penalties pursuant to the District’s Rate Order. Upon motion by Director Everhart, seconded by Director Woods, after a full discussion and the question being put to the Board, the Board voted unanimously to impose additional penalties pursuant to the District’s Rate Order.

Mr. Browne requested that the Board authorize termination of 196 delinquent accounts in accordance with the District’s Rate Order.
Mr. Browne reviewed a report from JW Construction Services related to an inspection of Lift Station No. 1 and recommends blasting and recoating of the interior piping that has corrosion through-out, floor coating and wall coating. He presented a proposal from CFG Industries, LLC to make the recommended repairs for an estimated total cost of $54,400.00 and a proposal from D & L Quality Painting Inc. for an estimated total cost of $52,300.00. Mr. Browne noted that the purpose of the re-coating is to extend the life of the pipes, however it will not extend the life of the pumps and that re-coating of the walls is aesthetic and not necessary at this time. The Board asked about the useful life remaining in the pumps and the cost of replacing the pumps. Mr. Browne presented a proposal from Cypress Bayou Industrial for an estimated cost of $58,860.00, which does not include inspections. Mr. Browne recommended the proposal from CFG Industries, LLC for piping coating and floor coating for an estimated cost of $24,000.00.

Upon motion by Director Everhart, seconded by Director Woods, after a full discussion and the question being put to the Board, the Board voted unanimously to terminate delinquent accounts in accordance with the terms of the District’s Rate Order, authorize MDS to send to collections delinquent accounts in the aggregate amount of $165.72, and approve the proposal from CFG Industries LLC for piping recoating and floor coating for an estimated cost of $24,000.00.

Mr. Jenkins updated the Board on Water Plant Improvements and requested approval of Pay Estimate No. 12 in the amount of $56,275.20. Mr. Jenkins presented Change Order No. 2, which was previously approved by the Board on February 14, 2019, which included elevation of the Motor Control Center Building (“MCC”) and the Generator Foundation. He reported that the MCC was constructed lower than the revised design elevation and discussed reconstruction of the MCC because the walls were not built to the correct height. He reviewed alternative options to address the elevation issue.

Mr. Jenkins reported on booster pump foundations to raise the foundation 12 inches to provide the same level of protection as the revised MCC and generator elevations. He recommended raising the booster pump foundations and presented Change Order No. 6 to increase the contract by $7,756.00 for the Board’s approval. Upon motion by Director Balderas, seconded by Director Everhart, after full discussion and the question being put to the Board, the Board voted unanimously to: 1) approve Pay Estimate No. 12 in the amount of 56,275.20, 2) authorize J|C to notify the contractor of the Board’s decision the MCC should be constructed pursuant to design at the contractor’s expense; and approve Change Order No. 6 in the amount of $7,756.00.

The Board considered approval of Special Warranty Deed for the conveyance of property from Parkway Baptist Church to the District for Lift Station No. 2 Site. Upon motion by Director Rettig, seconded by Director Woods, after a full discussion and the question being put to the Board, the Board voted to approve the Special Warranty Deed for conveyance of Lift Station No. 2 site.

Mr. Jenkins reported that the District’s prior engineer and attorney had advised that it is acceptable for Sunrise Plastics to use an existing non-potable water well. Mr. Wilson stated that he had no reservations. Discussion ensued regarding inspections and confirmation that the well will not be tied into the District’s system. Mr. Wilson reported that annexation documents have not been located and J|C stated that they will reach out to the former attorney to determine if they have any documents. Mr. Jenkins suggested authorizing J|C to compose a letter to authorize Sunrise Plastics to use non-potable water well. Director Everhart asked about the status of the water plant. Upon motion by Director Everhart, seconded by Director Balderas, after a full discussion and the question being put to the Board, the Board voted unanimously |to authorize Sunrise Plastics the use of an existing non-potable water well.

Mr. Jenkins recommended writing a letter to Greenwood Utility District (“GUD”) regarding overcharges for sludge hauling. Upon motion by Director Balderas, seconded by Director Retting, after a full discussion and the question being put to the Board, the Board voted unanimously to authorize J|C to write a letter for overcharges.

Mr. Jenkins reported that Harris County Flood Control District (“HCFCD”) has advised GUD’s engineer that HCFCD is requiring additional detention, which will increase the cost of the on-site detention requirements.
A copy of the Engineer’s Report on joint facilities matters from A&S Engineers is attached to the District Engineer’s Report under Exhibit L.

14. Report from Financial Advisor. Mr. Blitch stated that he has no further comments.

15. Building Superintendent’s Report. No report was received by the Board.

The foregoing minutes were passed and approved by the Board of Directors on October 9, 2019. 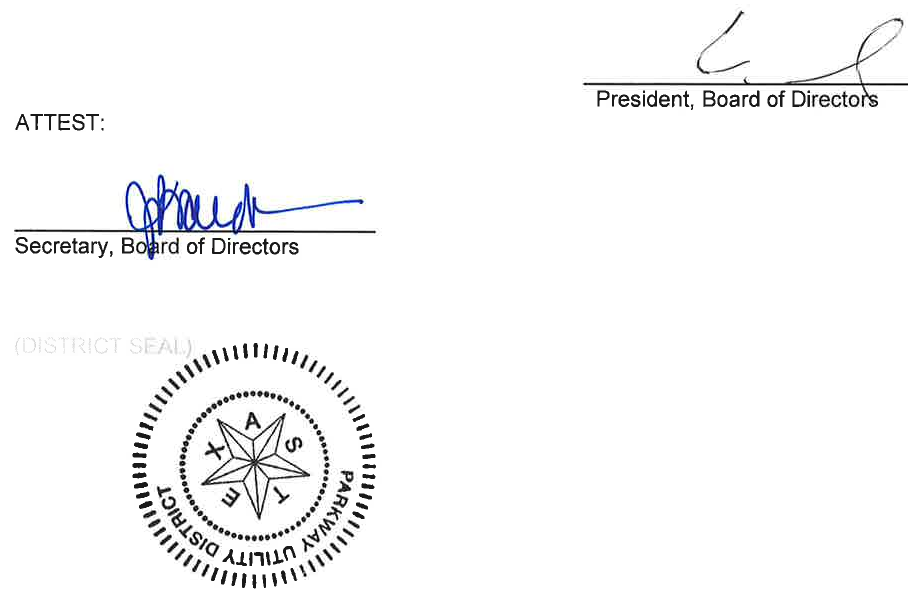