The Board of Directors (the “Board’) of Parkway Utility District (the “Oistricf’) met in a regular session, open to the public, at 12843 Tidwell Road, Houston, Texas, at 6:15 p.m. on October 9, 2019, whereupon the roll was called of the Directors, to-wit:

1. Public Comments. President McNeil opened the floor for comments. There were no public comments.

3. Report from Direct Waste Solutions. President McNeil recognized Mr. Singleton, who presented to and reviewed the Monthly Recycle Summary, a copy of which is attached hereto as Exhibit B. Mr. Singleton stated that there were no service interruptions during Tropical Storm Imelda. No action was requested of the Board.

7. Report from Systems Project Management. President McNeil recognized Mr. Syzek, who reviewed and presented the District’s General Manager’s Report, a copy is attached as Exhibit E. He stated that the District received a letter from the Harris County Engineering Department -Recovery & Resiliency Division (“HCED-RRD”) regarding the Parkway Forest Subdivision drainage improvements. He reported that the total estimated cost is $11,530,000 and it is not eligible for grant funding. He stated that HCED-RRD is requesting that the District fund 50% of the cost. Discussion ensued. Mr. Jenkins stated that JIC will respond to HCED-RRD.

Ms. Sears presented to and reviewed with the Board a proposal to install 907 feet of bollards and cable along Stonefield Manor Drive at a cost of $21,140.00, a copy of which is attached hereto as Exhibit G. The Board discussed an alternative placement of the bollards to lower the amount of footage. Ms. Sears stated that the revised proposal will be presented at the next meeting. No action was taken by the Board.

9. Report by Harris County Precinct Three Constable, including community Crime Watch, and action relating to Security. President McNeil recognized Sargent Ganey, who reviewed the Security Report for the month of September 2019, which was previously distributed to the Board. A copy of the Security Report is attached as Exhibit H. He and Deputy Trujillo reported on officer’s shifts and coverage for the District.

10. Discuss additional security cameras at the Water Plant. Mr. Browne stated that a representative from Zaladium was unable to attend tonight’s meeting but would be able to make next month’s meeting.

11. Tax Assessor and Collector’s Report, status of delinquent tax accounts, and payment of bills. Ms. Yanez presented to and reviewed with the Board the Tax Assessor-Collector’s Report for August, a copy of which is attached as Exhibit I. Ms. Yanez reported that 98.53% of the District’s 2018 taxes have been collected as of September 30, 2019.

Upon motion by Director Rettig, seconded by Director Woods, after full discussion and the question being put to the Board, the Board voted unanimously to approve the Tax Assessor­Collector’s Report and to authorize the expenditures listed therein.

Upon motion by Director Balderas, seconded by Director Rettig, after full discussion and the question being put to the Board, the Board voted unanimously to approve the Bookkeeper’s Report, to authorize payment of check nos. 10263 to 10326 from the District’s General Operating Fund, and check no. 1805 from the District’s Capital Projects Fund in the amounts, to the persons, and for the purposes listed therein.

14. Operator’s Report and hearing on delinquent accounts. President McNeil recognized Mr. Browne, who presented to and reviewed with the Board the Operations Report for September 2019, a copy is attached as Exhibit L. He noted that 96% of the water pumped was billed for the period from August 15, 2019 to September 15, 2019.

Mr. Browne reviewed maintenance and repairs for September 2019 of the District’s individual and joint facilities.

Mr. Browne reported that 4,481,112 gallons were transferred from Greenwood Utility District (“GUO”) to the Tidwell Lakes Wastewater Treatment Plant for the month of September.

Mr. Browne requested that the Board authorize termination of 267 delinquent accounts in accordance with the District’s Rate Order.

Mr. Jenkins updated the Board on Water Plant Improvements and stated that the North Ground Storage Tank (“GST”) was constructed approximately 10 feet from the fence line per revised plan sheets prepared by the previous engineer. He stated that the City of Houston requires GST’s to be 20 feet away from all structures and property lines. He requested authorization to verify the property boundaries and submit a variance request to the City of Houston. Discussion ensued.

Mr. Jenkins stated that with regards to the Water Plant piping, the City of Houston requires all plant piping to be Ductile Iron Pipe (“DIP”). He stated that the drawing prepared by the previous engineer did not specify the type of pipe in the drawings or specifications and that in review of the construction photos, it appears that HOPE pipe material was used. He requested authorization to submit a variance request to the City of Houston to allow the HOPE piping for the distribution lines. Discussion ensued. He noted that the approximate cost of submitting the variance request for both items is $5,000. It was the consensus of the Board to not take action at this time.

Discussion ensued. It was the consensus of the Board to propose splitting the legal and engineering fees with Sunrise.

Mr. Jenkins presented a budget worksheet of the District and joint facilities projects, a copy of which is attached hereto as Exhibit N.

16. Report from Financial Advisor. Mr. Blitch discussed a potential Bond Anticipation Notice (“BAN”) with the Board. Discussion ensued. Mr. Jenkins stated that he can reach out to Greenwood Municipal Utility District’s Engineer and write a letter to the City of Houston to request an extension.

17.Building Superintendent’s Report. No report was received by the Board.

The foregoing minutes were passed and approved by the Board of Directors on November 13, 2019. 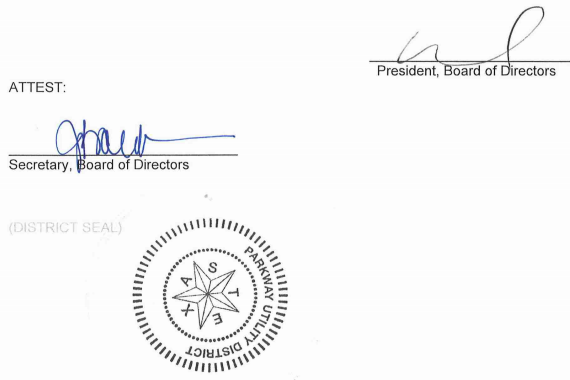