All members of the Board were present, thus constituting a quorum. Also attending all or parts of the meeting were Ms. Karen Sears and Mr. Oscar Fumero of Storm Water Solution; Sergeant Terry Gainey of the Harris County Constable’s Office, Precinct No. 3 (the “Constable”), security for the District; Mr. Jamal Singleton of Direct Waste Solutions, Inc. (“Direct Waste”), solid waste and recycling collectors for the District; Mr. Bradley Jenkins of Jones|Carter (“Engineer”), engineer for the District; Mr. Calvin Brown of Municipal District Services (“MDS”), operator for the District; Gary Syzek of Systems Project Management; and Mr. Reginald Wilson and Ms. Brenda Presser of Norton Rose Fulbright US LLP (“NRF”), attorneys for the District. Additional attendees to the meeting are listed on the attached sign-in sheet, attached as Exhibit A-1.

1. Public Comments. President McNeil recognized Mr. Singleton, who presented and reviewed a report on solid waste and recycling collection, a copy is attached as Exhibit B. He reviewed a flyer regarding acceptable recycling items and further discussed recycling challenges, a copy of the flyer is attached at Exhibit B-1.

2. Approve minutes of a meeting on February 14, 2019. Mr. Wilson requested the Board defer this item. The Board concurred to defer to the District’s next meeting.

3. Report by Harris County Precinct Two Constable. President McNeil recognized Sargent Ganey, who stated that he will prepare a synopsis of the security report and distribute to the Board before the next meeting. He reported on burglarized work vans in which tools and construction equipment were being stolen. Harris County is preparing a flyer for distribution to alert citizens with these types of vehicles and recommends installing a vehicle camera. He noted that this activity has increased over the last four to six weeks.

4. Community Crime Watch Report. No report was presented to the Board.

Ms. Sears discussed access to the District’s channel tops and deterioration caused by ATVs. She presented a proposal to install bollards and cable gates on Deep Valley to deter ATVs from accessing channel tops for a cost of $6,510.00. She also presented a proposal for metal reflective “no trespassing” signs for a cost of $1,250.00, which will enable the Harris County Constables to take action against trespassers. Discussion ensued regarding Nutria removal. Ms. Sears reported that Storm Water Solutions has a vendor that they can contact to assess the situation and provide the Board with a proposal for removal. Mr. Fumero discussed the damages that Nutria can cause to District property. The Board deferred action pending a walk-through of the trails with Mr. Syzek and Mr. Fumero to determine the status of Nutria habitation.

Mr. Syzek reviewed and discussed a road failure on Tidwell Road in front of Lift Station No. 2. Mr. Browne reported that MDS investigated this issue and first performed a dye test on the sinking area, then performed a televised inspection of the sanitary and storm sewer lines. He stated that breakage was found on the storm sewer line where infiltration was identified. This information was passed on to Harris County. Mr. Browne reported that he will be meeting with Harris County tomorrow to discuss and deliver a DVD of the televising, which will be reviewed and discussed by other officials at Harris County. Harris County is against making repairs to the road if there was a pipe failure.

6. Building Superintendent’s Report. No report was presented to the Board.

7. Discuss wastewater treatment plant project and take necessary action. Mr. Wilson updated the Board on Greenwood Utility District’s (“GUD”) actions on expanded capacity and consideration of a 225,000 gpd package plant. He stated that a cease connections letter has been prepared for President McNeil’s signature in which the Board is formally requesting that GUD cease connecting any new parties into the Regional Wastewater Treatment Plant. Discussion ensued regarding legal action if GUD continues to issue capacity
Mr. Wilson reported that the original Regional Wastewater Treatment Plant agreement between the District and GUD expired December 31, 2017, and no formal, written amendment or extension exists. He discussed negotiating a short term agreement with GUD in the interim to provide terms for operations and protection of the District’s interests in the Regional Wastewater Treatment Plant. Mr. Browne reported that MDS is actively reviewing GUD taps and will report the status to the Board starting March 15, 2019. He noted that year to date (January and February 2019) there have been 50 taps installed in GUD. Mr. Wilson stated that currently the regional facility is operating under the terms of the previous agreement and he advised the District to not accept payments for capacity to avoid the appearance that the District is in agreement with leasing capacity to GUD.

Mr. Wilson requested that the Board provide at least three available dates to participate in a Joint Facilities Meeting with GUD. It was the consensus of the Board to meet on March 25th, 26th, or April 3rd.

Mr. Wilson reviewed a letter from Mr. Jeremy Bartholomew, Manager for Rutherford Park, LP, requesting that the Board authorize the District’s engineer to finalize and release approval of the on-site construction plans so that the project may proceed forward, a copy of the letter is attached as Exhibit E. Mr. Jenkins reminded the Board that when capacity was issued for Rutherford Apartments, it was subject to Tidwell Lakes Force Main rerouting. He stated that he is not comfortable approving the construction plans and conducting an inspection of the property until there is a concrete plan for GUD to obtain their own capacity and returns the District’s available capacity. Mr. Bartholomew explained that the project is part of a tax credit exception of 2018 and is involved with the Texas Department of Housing and Community Affairs. He reported on restrictions with the project to meet specific deadlines because the property is financed with tax credits. He requested that the Board authorize Mr. Jenkins to approve the plans with the caveat that Rutherford is prohibited from installing taps for water and sewer. Discussion ensued. Messrs. Wilson and Jenkins suggested wet hauling as a temporary solution until Tidwell Lakes Wastewater Treatment Plant is operational and/or GUD’s package plant is up and running. Mr. Bartholomew was open to the suggestion and was willing to coordinate with the District’s engineer and legal counsel to prepare an agreement that provides for wet hauling, if needed. 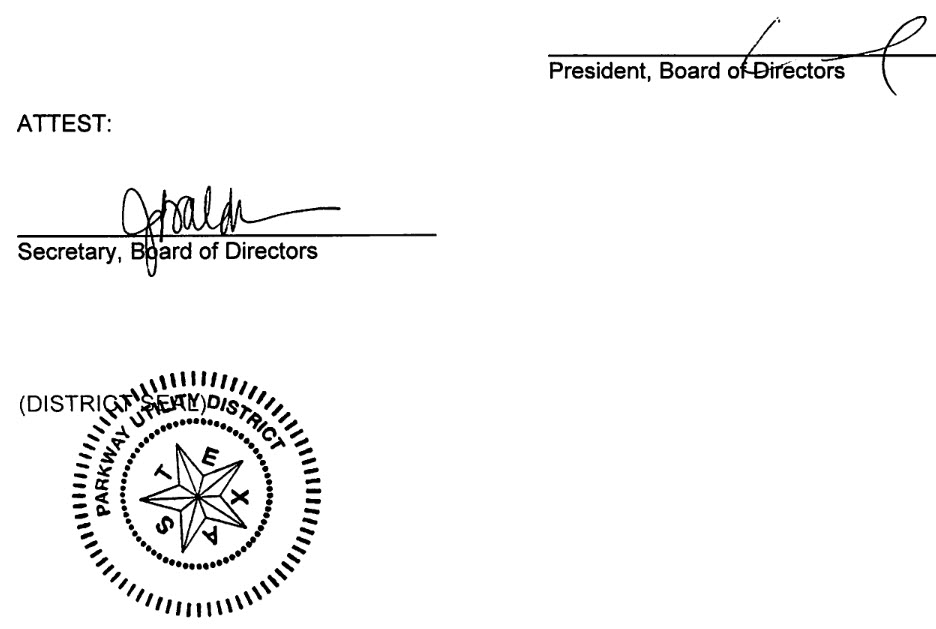