1. Public Comments. President McNeil opened the floor for comments and no comments were received by the Board.

2. Minutes of previous meeting(s). Minutes of the meeting of June 12, 2019, previously distributed to the Board, were presented for consideration and approval. Upon motion by Director Rettig, seconded by Director Woods, after full discussion and the question being put to the Board, the Board voted unanimously to approve the minutes as presented.

3. Report from Direct Waste Solutions. President McNeil recognized Mr. Singleton, who presented a summary on recycling, a copy is attached as Exhibit B. No action was requested of the Board.

He reported that the alligator was captured and relocated with the assistance of Wildernex Wildlife Relocation and filmed by a crew from the cable network Animal Planet. He stated there have been no further sightings since the relocation of the alligator.

Mr. Syzek reported on the June meeting of the Greens Bayou Coalition East Reach (“East Reach”) meeting at Texas Parks & Wildlife Department’s office in Sheldon. He stated that the Executive Director announced a proposed sale of the Coalition’s 33-acre Stanley Preserve tract on Garrett Road, which could potentially add approximately $1.2 million to the Coalition’s operations reserve. He stated that East Reach is seeking input to identify three priority projects for consideration and encouraged public participation and noted confirmation of attendance by HOA representatives in the District.

Mr. Syzek reported calls received from the Stonefield HOA President regarding repeated illegal dumping activities in the rear easement of Stonefield Terrace, specifically in the Harris County Flood Control District (“HCFCD”) easement. He noted that HCFCD is not removing the debris and that the Stonefield Terrace Community Association is paying for the cleanup, which is the fourth time in three months. He reviewed a notice posted on the District’s Crime Watch page with contact information to report illegal dumping activities.

Mr. Syzek reported on the ongoing repair to the effluent outfall pipe that flows from the Wastewater Treatment Plant (“WWTP”) to Greens Bayou that was discussed by the Board during the field inspection of District facilities. He noted that the bank slopes are consistently re-configured due to high rainfall events and pipeline configurations are faced with constant hydraulic stress. He stated that the WWTP plant operator recommended an alternative flow solution and the engineers for Greenwood Utility District (“GUD”) are currently weighing options to address the repair.

5. Report from Storm Water Solutions. There was no report for the Board.

6. Report by Harris County Precinct Three Constable, including community Crime Watch, and action relating to Security. President McNeil recognized Sargent Ganey, who reviewed the Security Report for the month of June 2019, which was previously distributed to the Board. A copy of the Security Report is attached as Exhibit D.

Sargent Ganey reported that Harris County is working towards implementing a bike patrol and discussed the training process that is required.

Sargent Ganey reported that high water vehicles are on reserve pending the status of the tropical storm in the Gulf of Mexico.

Sargent Ganey stated that Harris County is requiring that all deputies be trained on Nuisance Abatement and he confirmed that all deputies have been certified in this training. He requested that Board members contact his office for assistance with nuisance abatement.

8. Tax Assessor and Collector’s Report, status of delinquent tax accounts, and payment of bills. Ms. Yanez presented to and reviewed with the Board the Tax Assessor-Collector’s Report for May, a copy of which is attached as Exhibit F. Ms. Yanez reported that 97.72% of the District’s 2018 taxes have been collected as of June 30, 2019.

Upon motion by Director Rettig seconded by Director Everhart, after full discussion and the question being put to the Board, the Board voted unanimously to approve: (1) the Tax Assessor-Collector’s Report; (2) to authorize the expenditures listed therein; (3) the Order Adopting Tax Exemption for Individuals Who Are Disabled or Are 65 Years of Age or Older; and (4) Order Adopting Exemption, as presented.

Upon motion by Director Everhart, seconded by Director Rettig, after full discussion and the question being put to the Board, the Board voted unanimously to approve the Bookkeeper’s Report, to authorize payment of check nos. 10081 to 10144 from the District’s General Operating Fund, and check nos. 1789 through 1795 from the District’s Capital Projects Fund in the amounts, to the persons, and for the purposes listed therein.

10. Discuss modified rates for Forest Park Apartments, and receive update on occupancy. President McNeil recognized Ms. Ashworth, of the Forest Park Apartments (“Forest Park”), who reported that Forest Park was flooded during Hurricane Harvey. She stated that all of the units have been vacated, as of July 1, in order to construct upgrades and repairs. Ms. Ashworth acknowledged that the modified rates granted by the District to Forest Park expired in June, 2019. She stated that the water main and sewer will be shut down during construction. An update on the status of permits, installation of sprinkler and fire prevention system was provided to the Board, with an anticipated 12-month construction period following installation of the fire prevention system. Ms. Ashworth noted that an application has been submitted for a tap and requested the Board’s consideration to modify the rates for water and sewer during construction and rehabilitation of the units. The Board asked about partial occupancy as the repairs and upgrades are completed for each building within the complex. Ms. Ashworth stated that the Fire Marshal will determine if partial occupancy will be allowed. She requested a temporary extension of the previously approved agreement for one-half of the units for one month until the Board next meets to discuss and determine action on Forest Park’s request for modified rates during construction. Discussion ensued. Upon motion by Director Rettig, seconded by Director Everhart, after full discussion and the question being put to the Board, the Board voted unanimously to authorize MDS to adjust Forest Park’s billing to bill water and wastewater service one-half of the units for one month until the District’s next meeting on August 14, 2019.

Ms. Marcucci asked about shutting off the Master Valve. Mr. Wilson reported that the Board will add to next month’s agenda an item to discuss amending the Rate Order.

The Representatives of Forest Park departed the meeting. Discussion ensued regarding options for modifying the rates for Forest Park during construction and rehabilitation of the property. No action was taken by the Board.

11. Operator’s Report and hearing on delinquent accounts. President McNeil recognized Ms. Marcucci, who presented to and reviewed with the Board the Operations Report for June 2019, a copy is attached as Exhibit J. She noted that 92% of the water pumped was billed for the period from May 15, 2019 to June 15, 2019.

Ms. Marcucci reviewed maintenance and repairs for June 2019 of the District’s individual and joint facilities.

Ms. Marcucci reported that 4,954,165 gallons were transferred from Greenwood Utility District (“GUD”) to the Tidwell Lakes Wastewater Treatment Plant for the month of June.

Ms. Marcucci requested that the Board authorize termination of 232 delinquent accounts in accordance with the District’s Rate Order and to write-off accounts in the aggregate amount of $1,463.61.

Ms. Marcucci reported on costs to Forest Park in the amount of $28,900.00 for Builder Deposit and tap fee for sprinkler system.

Mr. Jenkins reiterated that the plans were approved for the Forest Park Apartments fire line.

Mr. Wilson reported that in connection with the Board’s approval on Monday, July 8, 2019 to authorize the engineer to file a bond application report, an Order Authorizing The Filing of an Application with the Texas Commission on Environmental Quality has been prepared for signature.

Mr. Jenkins stated that he will coordinate with GUD’s bookkeeper and engineer regarding sludge hauling discrepancies.

Mr. Jenkins reported on joint facilities matters, which are also included in a report from A&S Engineers. A copy is attached as Exhibit K-1.
Upon motion by Director Rettig, seconded by Director Everhart, after full discussion and the question being put to the Board, the Board voted unanimously to approve the Engineer’s Report.

13. Discuss annexation of approximately 24.65 acres at Beltway 8 East and West Little York Road. Mr. Jenkins reported on a letter from Third Coast GC’s requesting annexation into the District, which will require approximately 10,143 gpd for water and sewer. He stated that the property is located at Beltway 8 and West Little York and that he responded to the developer that the District does not have water or wastewater capacity to serve the property. Mr. Jenkins also informed the developer of the costs for an annexation feasibility study and associated engineering and legal fees for annexation that would be funded by the developer. Discussion ensued regarding the return of capacity to the District from GUD and it was noted that, given the current capacity flows, additional capacity is unavailable to serve new requests for service until the Wastewater Treatment Plant is expanded and Lift Station No. 2 is upgraded.

14. Report from Financial Advisor. Mr. Blitch noted the distribution of the Texas Municipal Report on the District’s debt.

15. Building Superintendent’s Report. Director Rettig stated some things need to be addressed at the administration building, but he will defer pending completion of the Water Plant Improvements.

Director Rettig discussed the request from the Harris County Constables Office to use facilities at the administration building and stated it needs to be a Board decision. It was the consensus of the Board to defer action pending attendance by all directors.

17. Approve Interlocal Agreement with HGSD for the WaterWise Program for the 2019-2020 school year. Mr. Wilson reported that the Harris Galveston Subsidence District requests sponsors for its water conservation education program for local elementary schools. Discussion ensued regarding groundwater credits and participation value. It was the consensus of the Board to defer action.

18. Arbitrage Rebate and Yield Restriction Compliance Program Report. The arbitrage report states that the District is in good standing and no action is required by the Board.

The foregoing minutes were passed and approved by the Board of Directors on August 14, 2019. 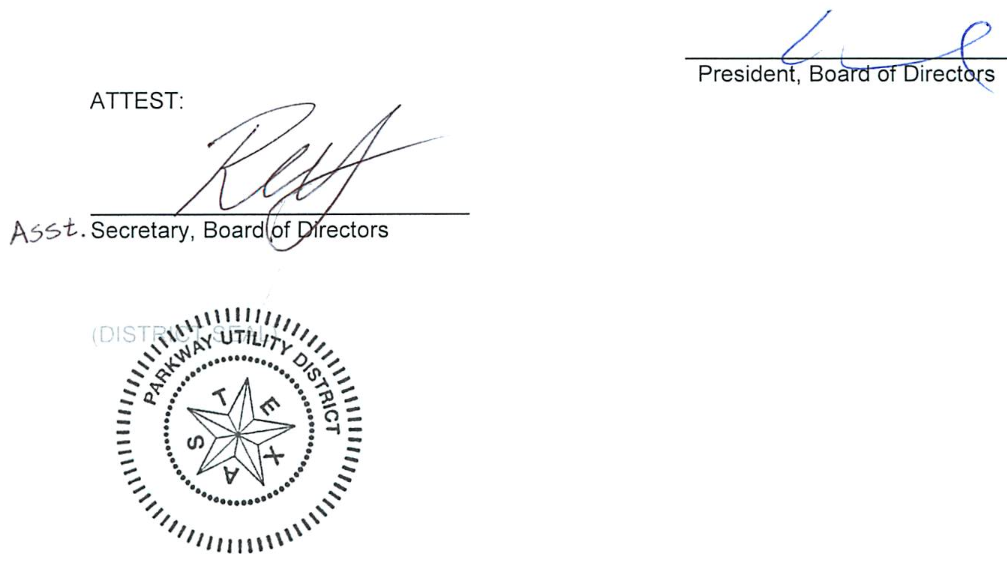